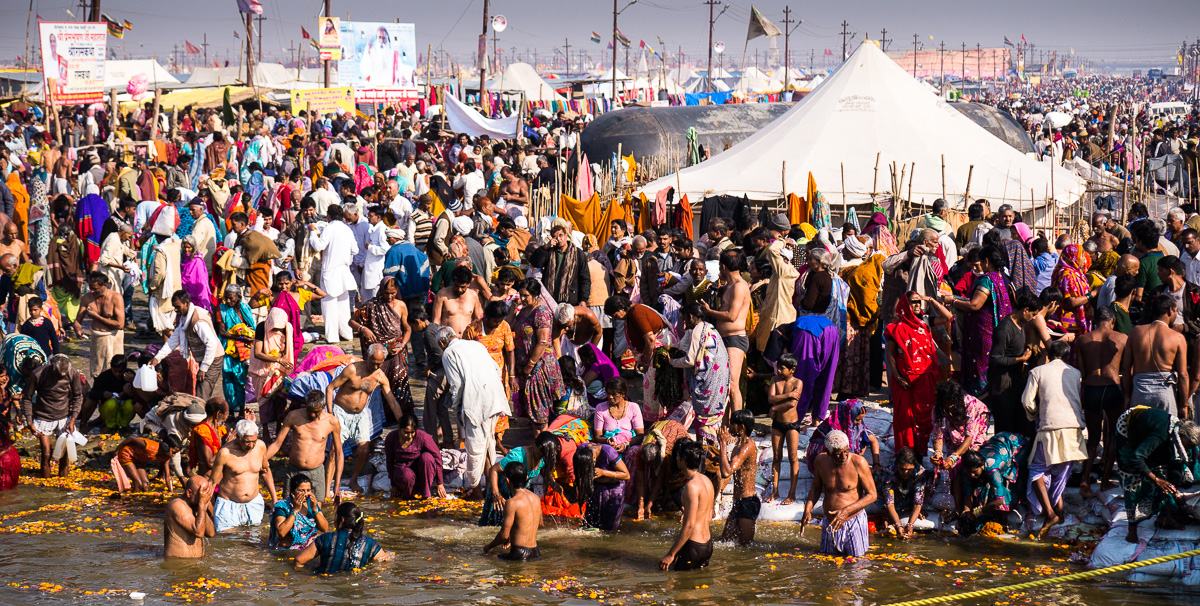 First off, to do justice to the Kumba Mela story in just three photos is difficult. Translating as ‘The Great Festival of the Urn’, the event is beyond enormous. Some twenty-five square miles with hundreds of acres of tents,  Kumba Mela is first and foremost about the ritualistic cleansing of souls. In a way it is an Indian version of Woodstock, all about love and peace. A unique blending of spirituality and commercialism, a carnival and tent revival rolled into one.

This mass pilgrimage of faith, in which Hindus gather to bathe in a sacred river, is the greatest gathering of mankind on earth. Over 130 million attended at this time last year. A literal sea of humanity. They are relentless and unstoppable. Carrying their possessions on their heads, they descend upon Hinduism’s holiest place, the confluence, or Sangam, of India’s two holiest rivers, the Ganges and the Yamuna, and a third mystical underground river, the Saraswaiti. The shear magnitude of the festival is impossible to comprehend, even though I was there for several days. But it is not about the numbers. It is about the pilgrims and their utter devotion, their spirituality. They come from all over India, roughly ten percent of the entire population, to this most auspicious place at this most auspicious moment. The devotees come to the Sangam for their ritual bathing, their “holy dip.’ They believe by submerging themselves in the holy water they and their ancestors will be absolved of sin.

So, one journey ends and another begins. After visiting the Kumbh Mela of 1895, Mark Twain wrote:

It is wonderful, the power of a faith like that, that can make multitudes upon multitudes of the old and weak and the young and frail enter without hesitation or complaint upon such incredible journeys and endure the resultant miseries without repining. It is done in love, or it is done in fear; I do not know which it is. No matter what the impulse is, the act born of it is beyond imagination…

Postcard from the Backwaters – Kerala, India