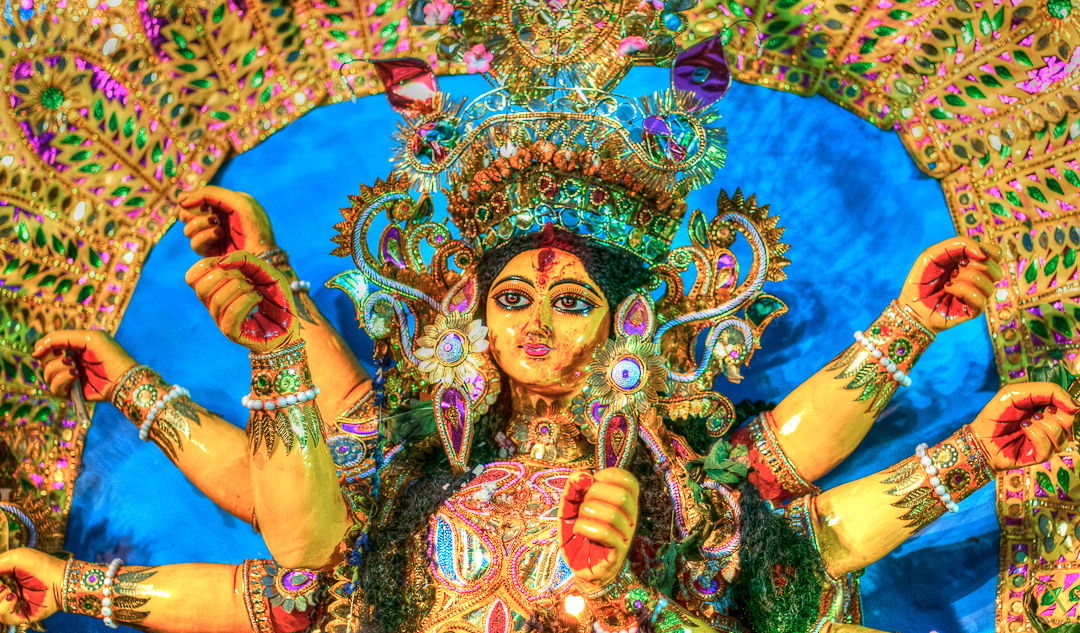 The Durga Puja (Pujo in Bengali) is celebrated in various parts of India in different styles, but not on the grand scale of the Festival in Calcutta. This year’s celebration will be starting in a few weeks. I attended and photographed Durga Puja in Kolkata in October, 2011.

The days are long. The heat and humidity are oppressive; the crowds, claustrophobic. The sights, sounds, and smells can be overwhelming at times. In spite of and because of the difficult conditions Durga Puja was truly an experience of a life time.

Below is the first of a two part post on that event.

To be in Calcutta, now officially named Kolkata, India, for the Durga Puja was an amazing experience and a photographer’s dream. The Puja is the worship of the Hindu goddess Durga when she revisits earth for four days each year in October. The wife of Shiva, Durga has four children: Lakshmi, Saraswati, Kartikeya, and my favorite, Ganesha, the elephant-headed deity of wealth and success, who are depicted with her. The goddess Durga is usually portrayed as riding a lion, and carrying weapons in many of her ten arms and thus she is the ferocious protector of the righteous, and destroyer of the evil. The worship or Puja of the goddess Durga dates back to the late 1500s.

Today the Durga Puja is the celebration of the beloved Mother Goddess (Maa Durga) and is the highlight of Calcutta’s religious and social calendar. Think of celebrating Christmas and New Years all rolled into one and lasting about a week. The idols are displayed in private homes and in pandals, the huge temporary canopies – held by a framework of bamboo poles and draped with colorful fabric – that house the icons. Today these structures are innovative, artistic and decorative at the same time, offering a visual spectacle for the numerous visitors who go ‘pandal-hopping’ during the four days of Durga Puja. Their creation is very competitive and it could easily be said the Durga Puja in Calcutta has become the largest outdoor art festival on earth.

The idols are made in the settlement of Kumartuli, meaning “potter locality” in northern Calcutta from bamboo, straw, and clay. The entire process of creation of the idols from the collection of clay to the ornamentation is a holy process, supervised by rites and other rituals. On the Hindu date of Akshaya Tritiya when the Ratha Yatra is held, clay for the idols is collected from the banks of the Hougly River, a branch of the Ganges that runs through Calcutta. An important event is ‘Chakkhu Daan’, literally donation of the eyes. Starting with Devi Durga, the eyes of the idols are painted on Mahalaya or the first day of the Pujas. Before painting on the eyes, the artisans fast for a day. When completed, the idols are loaded on trucks with much noise and fanfare to be delivered and installed in the pandals.

Drumming is an integral part of the festival. Even a small pandal without the beat of drums is unimaginable. Dhakis are the traditional drummers who play the dhak (drum) at the pandals and during the festival processions. They are often landless peasants who live in the outlying areas. Durga Puja is a rare opportunity for them to earn cash.

Fresh flowers have a significant part in the festival and the wholesale flower market at Mullickghat, under Howrah bridge, is crowded with vendors and buyers. Garlands of marigolds, lotus blooms, and roses all have a role in the ceremony and celebration of the Puja. The Kabapatrika, a bundle of nine plants including a banana leaf representing the nine goddesses of the Durga Puja and a vital part of the ritual, are assembled and sold as well. See below.

The Kabapatrika is placed in a pot and wrapped in a sari and taken to a ghat along the Hougly to be bathed. The procession with a priest carrying the nabapatrika, preceded by dhakis and followed by the women of the house blowing conch shells meanders through the streets to the river. After the bath the nabapatrika is returned to the site of the Puja, wrapped in its sari and placed to the right of the goddess. This is repeated over a thousand times throughout the city.

Be sure to watch for Part 2 next week.