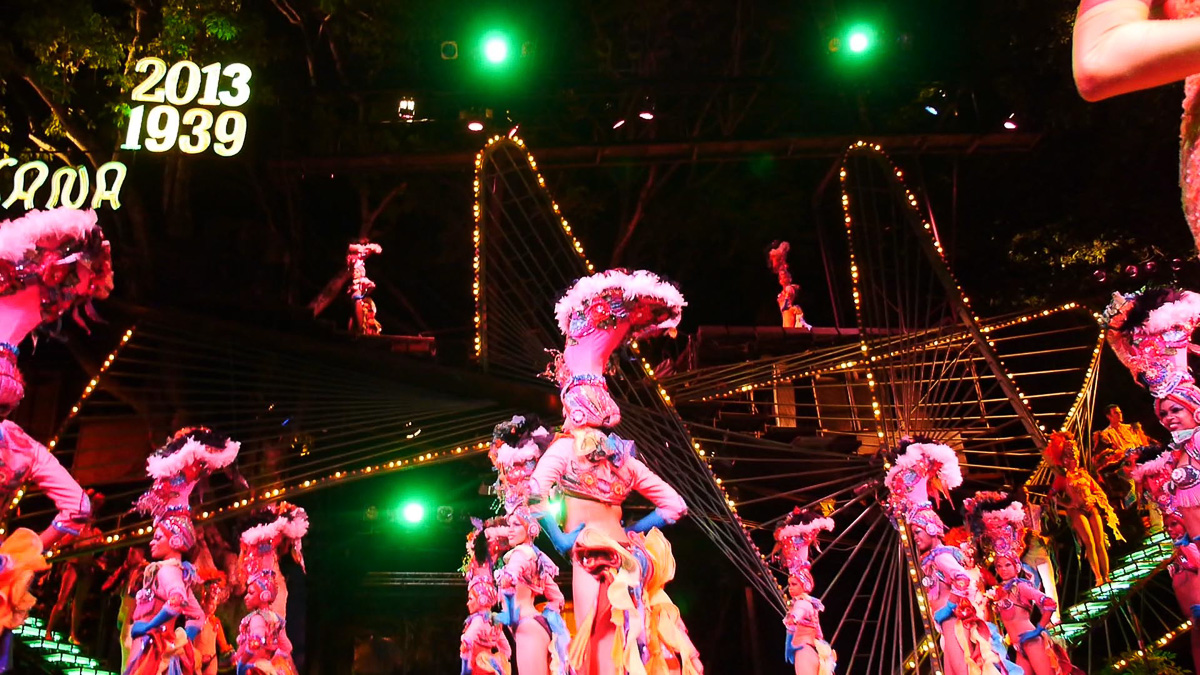 “It was breathtaking! My mouth just fell open…there was so much color, so much movement…and the orchestra! The house band had forty musicians…I said to Nat, ’that’s the house band? Are there that many showgirls?” Maria Cole, Nat King Cole’s wife.

The Tropicana, a world renown cabaret and nightclub, located in Havana’s suburban Marianao neighborhood, has been going strong since 1939. It evolved from a Havana nightclub, Eden Concert. Two casino operators and the Eden Concert’s owner formed a partnership and opened their combined casino and cabaret at Villa Mina, a lush tropical estate in the outskirts of Havana. Thus, on New Year’s Eve  1939, the Tropicana was born. The iconic nightclub has had a long and checkered history, but the Tropicana has always been associated with Las Diosas de Carne (Flesh Goddesses), as the showgirls are known. These scantily clad female dancers, their costumes mostly feathers and sequined thongs, dance and twirl across the outdoor stage as they have for decades in a show that begins at ten in the evening and doesn’t end until early the next day. The productions are lavish and extravagant.  The choreography  is superb and the orchestra plays the cabaret’s signature Afro-Cuban rhythms nonstop. During the club’s heydays in the 1950s, all of the costumes and sets were made on the premises. Designers and buyers were sent to Miami and New York to buy fabrics, shoes, etc. All that represents the Tropicana has helped spread Cuban culture around the world. There are Tropicana wannabes from Las Vegas to Atlantic City and beyond. Heck, there is even a brand of orange juice named after the cabaret. 🙂 In the TV show, “I Love Lucy,” Ricky Ricardo, played by Cuban born Desi Arnez, was the bandleader and singer at the fictional Tropicana nightclub that attempted to emulate its namesake. During the 50s, Cuba, being just 90 miles from Florida, was a popular tourist destination for Americans. In 1957 the Tropicana arranged for Cubana Airlines to fly a plane load of wealthy revelers and gamblers from Miami to Havana every Thursday for a weekend at the cabaret and casino. The plane featured a wet bar stocked with everything imaginable, a scaled down version of the Tropicana’s orchestra, and, of course, a bevy of show girls. The club became:

“a magnet for international celebrities, musicians, beautiful women, and gangsters.”
Havana Nocturne: How the Mob Owned Cuba…and then Lost it to the Revolution by T.J. English

Be sure to watch the above video to get an idea of the high energy, pulsating music and dancing!

The club was owned by Martin Fox, a burly, uneducated, but well connected gambler from the Cuban countryside, during those extravagant years. The cabaret and its grandiose shows were his passion. However, the casino side of the business had been infiltrated and eventually controlled by Tampa mobster, Santo “Louie Santos” Trafficante Jr. The Cuban Revolution brought everything to a halt in 1959. Castro closed all of the casinos and nationalized all of the casino and hotel properties in the country. The mobsters that weren’t able to escape were imprisoned. Martin Fox and his family fled to Miami. Today the nightly shows at the Tropicana go on, albeit not in their former glory. The casinos are closed and the cabaret is a government bureaucracy. Tickets for the show cost close to $90, over four times the average Cuban’s monthly wage. One sultry evening recently, Travelerlynne and I took in the non stop, high energy  show. It was a night to remember and a highlight of our Cuba trip. As I watched the show, I wondered what it must have been like in 1957 when the Tropicana was in it’s prime. Actually, I was there. As a kid on a weekend visit to Havana. Problem is,I just don’t recall much about it. But, I will savor and keep this recent memory.

A Beer with Friends at the Local Pub, Prague, Czech Republic