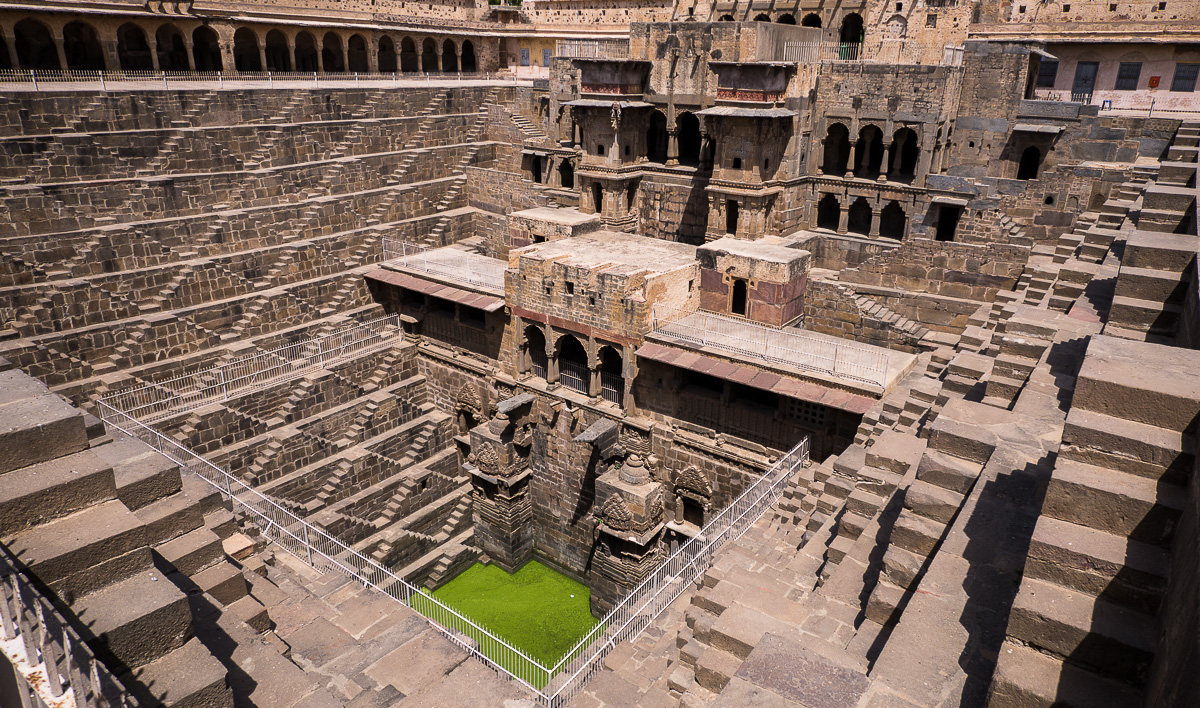 We are traveling east from Jaipur to Agra and the Taj Mahal, but want to find Chand Baori, an ancient, seemingly little known, stepwell. A stepwell, baori in Hindi, is a large stone cistern dug into the ground and lined with steps, enabling villagers to fetch fresh water throughout the year. Rejender, our intrepid driver for the past dozen days while in Rajasthan, says he thinks he has heard of it. Perfect, I think. Another chance to explore some of the way back roads in northern India. Rejender, though somewhat amused with our incessant curiosity, seems up to the challenge.

We know the baori is near a small, back roads village, surrounded by fields of wheat, now being harvested. After driving for a while we stop to stretch our legs. Our driver approaches a group of men and asks about Chand Baori. The men are animated, their Hindi rapid fire, and their arms pointing in several different directions. A smile on his face, Rajinder returns to the car with a shrug. Another several kilometers down the highway, another stop and inquiry. Consensus this time. Go to the next congested area along the road, turn left to the Abhaneri Village, turn right at the roadside market and proceed a few kilometers. It will be on the right just next to the ancient Harshat Mata Hindu Temple.

Oh my gosh, what a sight. Imagine an ancient Egyptian pyramid inverted and thoughtfully lodged into the ground. Chand Baori is over 100 feet deep and is lined with 3,500 symmetrical steps on three sides allowing access to water regardless of the level. The symmetrical, though dizzying, zig-zag pattern of the stone steps is reminiscent of an Escher drawing. The texture created by the light and shadows is the baori”s most fascinating feature. The fourth, northern side is a series of pavilions supported by pillars and faced with beautiful, ornate religious carvings. Temperatures are several degrees cooler near the bottom of the well. Locals would lounge around the well during Rajasthan’s unbearably hot summers while waiting for the much anticipated monsoon. Littering the arcade that surrounds the well are beautiful old carvings, supposedly from the Harshat Mata Hindu Temple next door. The temple was built at the same time as the well and honors the Goddess Marshat Mata. It is still an active temple, though in very poor condition. Built in the ninth century by King Chanda the well is one of the oldest and largest in India and provided a dependable water source for centuries until more modern water delivery systems were built during British rule. According to the Archaeological Survey of India, Chand Baori is a class one monument, as is the much more recent Taj Mahal. While this classical example of Hindu architecture is not as elegant as the Taj, not as well preserved, it is well worth discovering. It is amazing that there is so little interest in the hundreds of stepwells that dot northern India. They are a significant part of India’s history as the aqueducts are to the history of the Roman Empire. We knew nothing of stepwells until reading about them on “The Urge to Wander” blog. Thanks Madhu.

The Orange Robes of Laos

Fresh Flowers for a Goddess