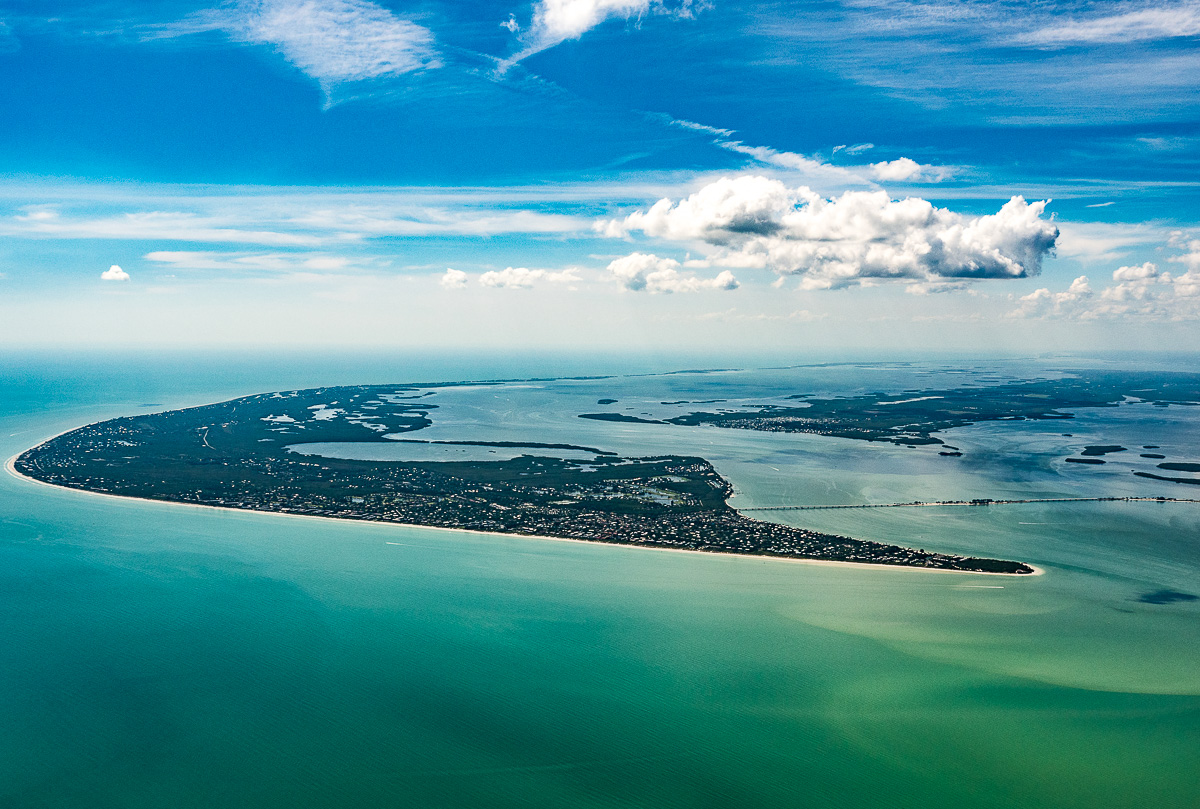 We are blessed. We live in paradise. A little spot of ground surrounded by palms and tropical fruit trees. On an island. Just minutes to the Gulf of Mexico.

Saint James City, a tiny waterfront community of about 4500 year-round  residents, forms the southern tip of Pine Island in Southwest Florida. Islands, of course, are surrounded by water and ours is no different. One piece of water with four different names: Charlotte Harbor to the north, Matlacha Pass to the east, San Carlos Bay to the south, and Pine Island Sound to the west. 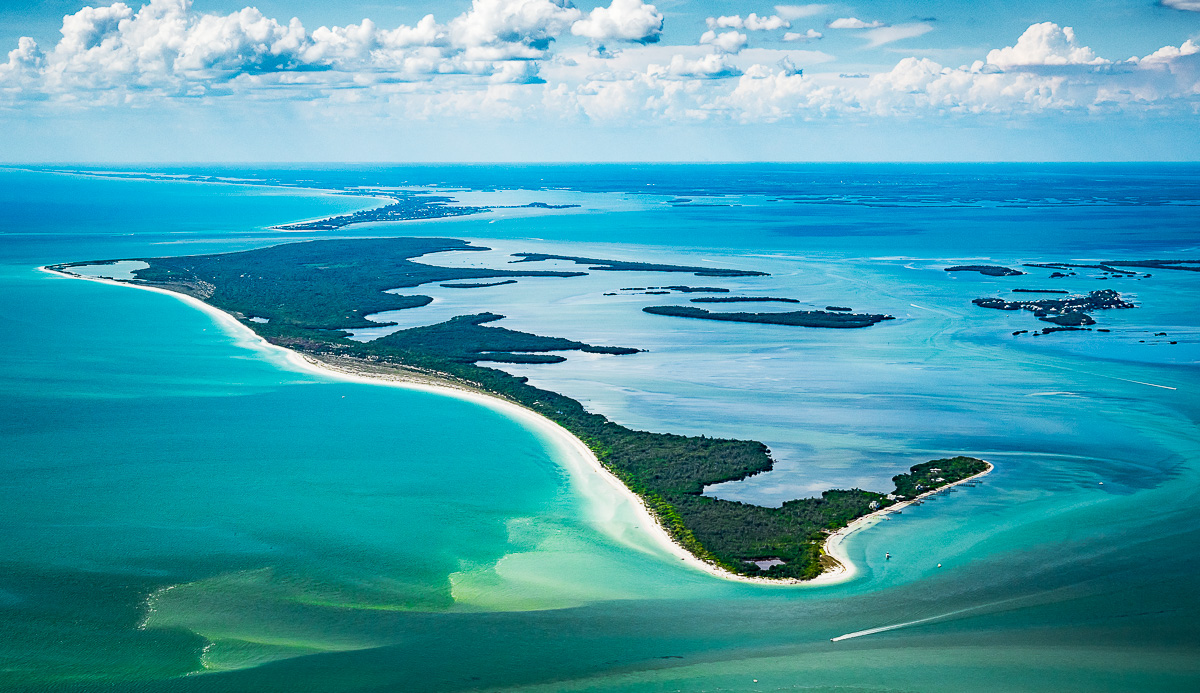 We have  neighbors. Hundreds of them. Large and small. Well known (Sanibel and Captiva Islands) and obscure (Panther Key, Mondongo, Punta Blanca). 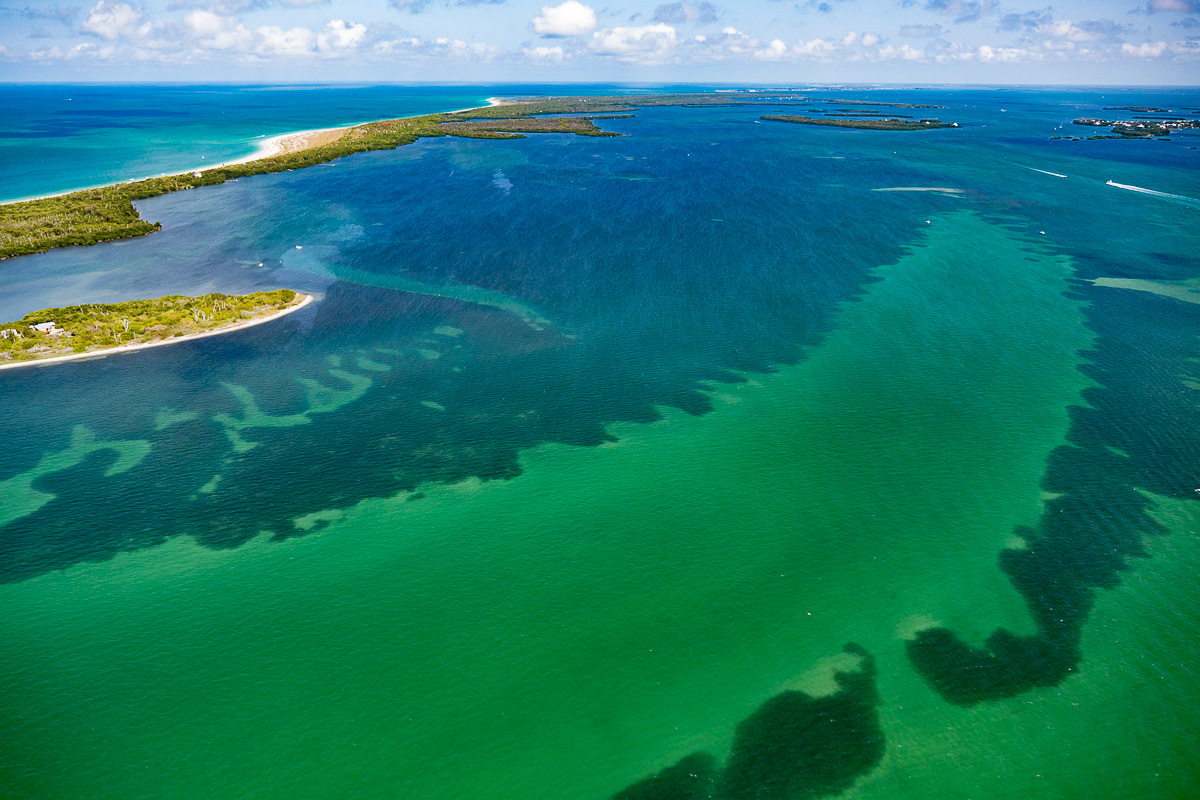 The real beauty of the area is the water itself, especially from the air. I expected that, but I was overwhelmed at just how enchanting. It was like being in a gigantic abstract painting by nature done in swirls of vivid hues of turquoise, cobalt blues, and dark greens.  The task at hand was to photograph the islands and geological features of Pine Island Sound for Denege Patterson for her upcoming book, A Tour of the Islands of Pine Island Sound, slated to be released early next year. Leaning out of a doorless helicopter, photographing an area I know so well from the water made for an exhilarating adventure. 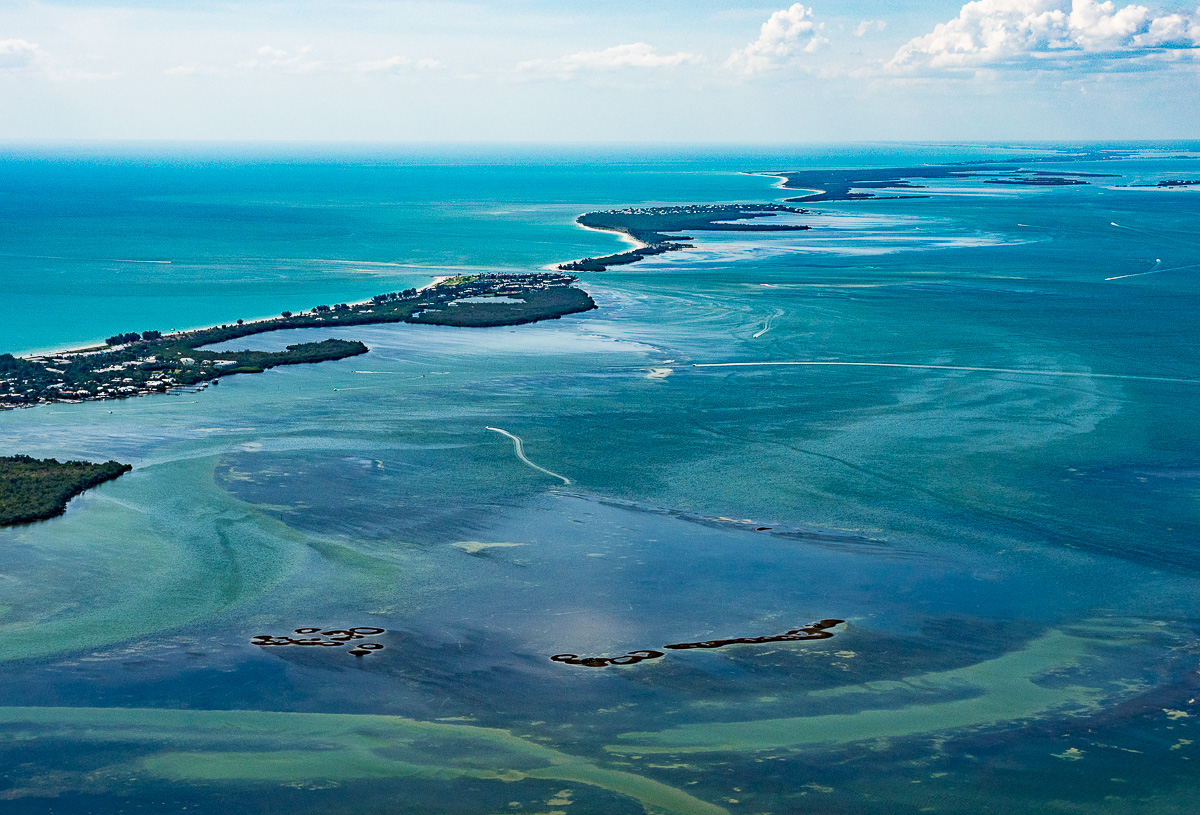 Come along for a birds-eye view of where we call home. 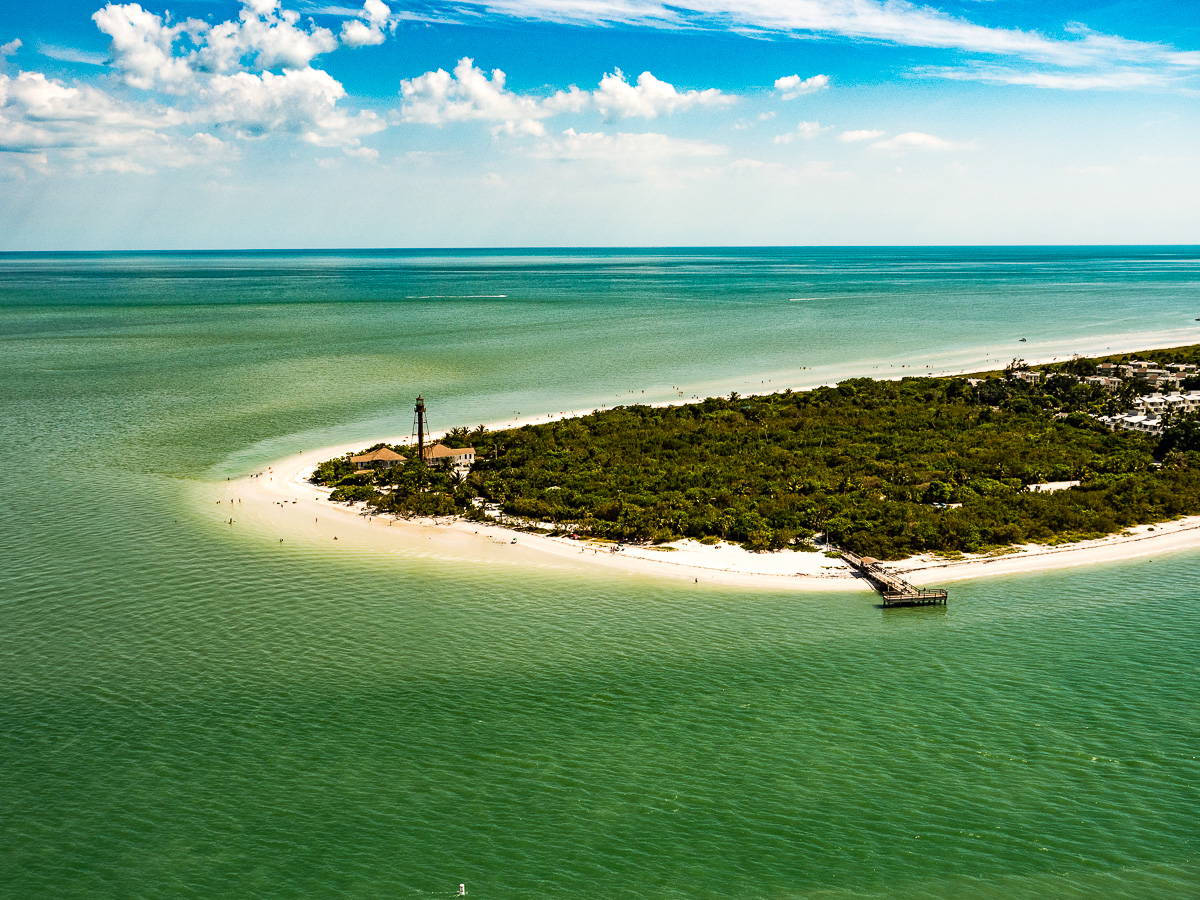 The Sanibel Lighthouse looking out over the Gulf of Mexico. 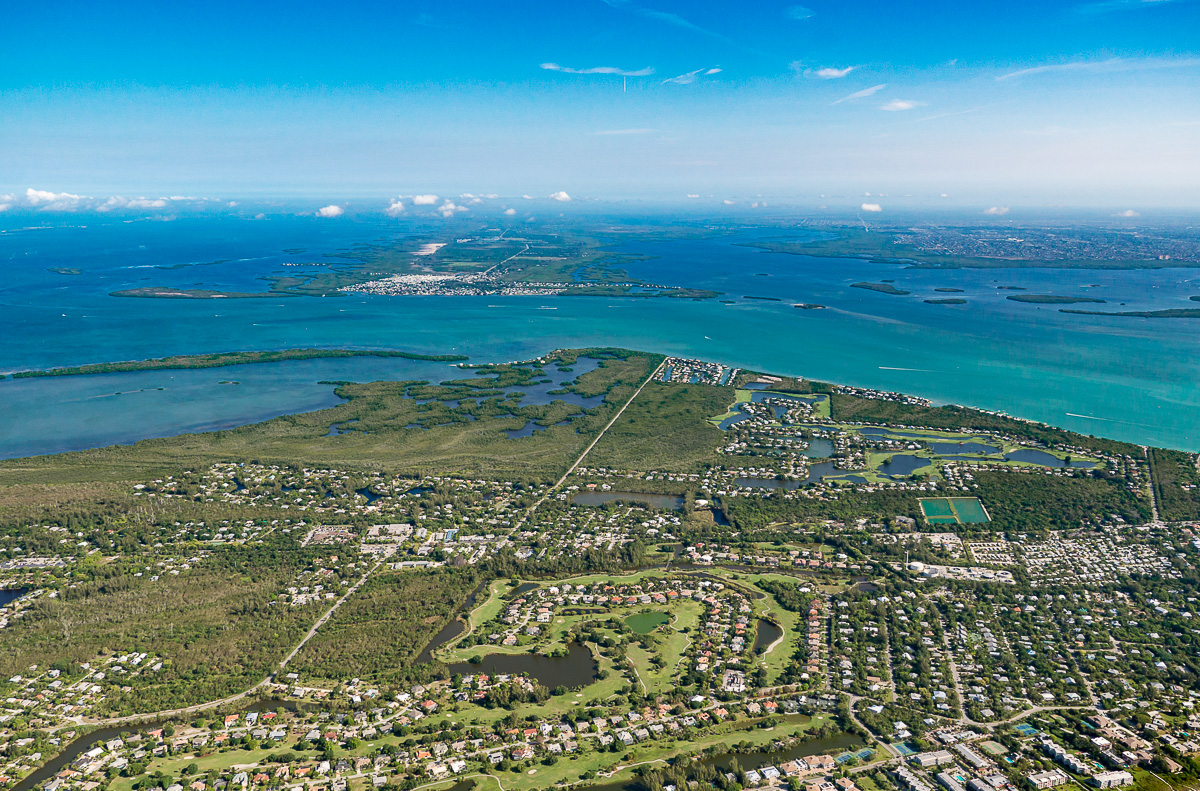 Looking across Sanibel Island toward St James City and the southern tip of Pine Island. 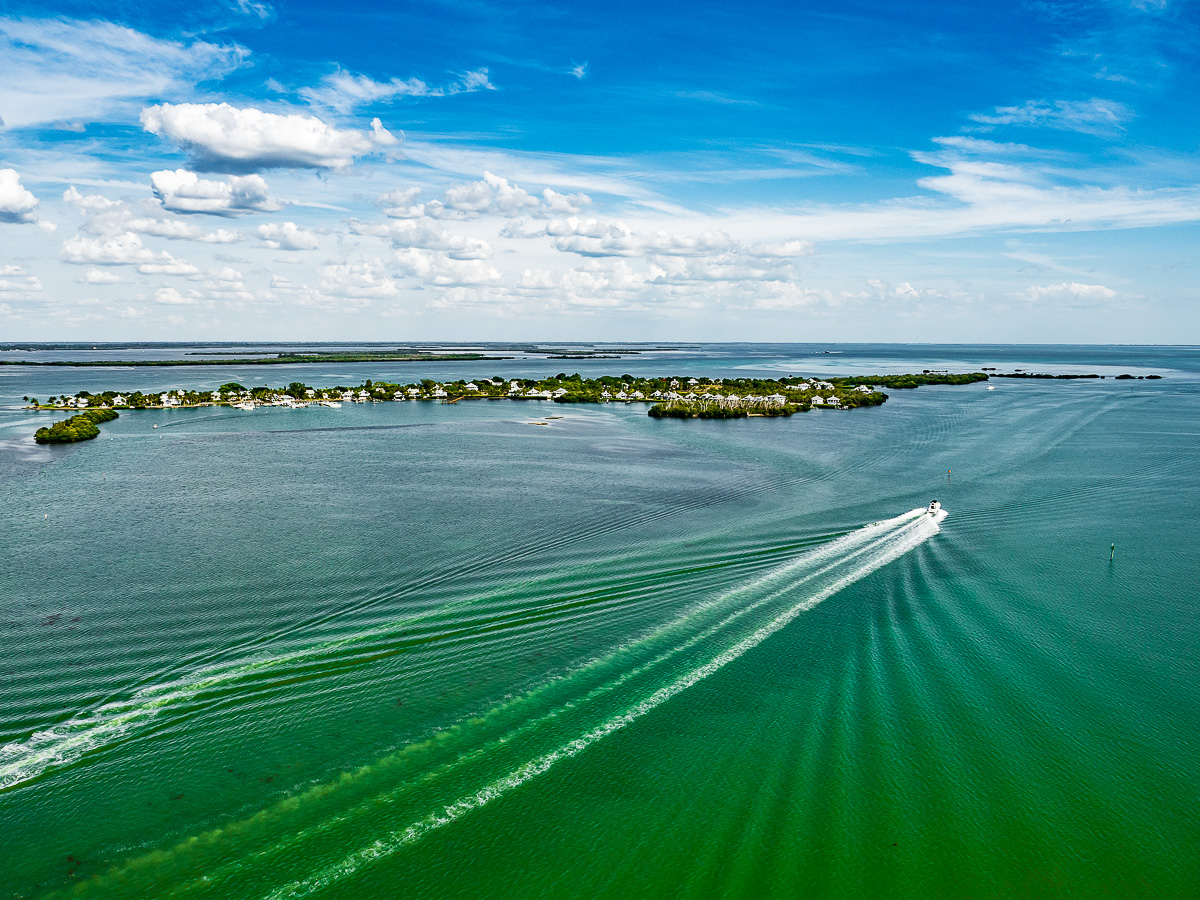 A boat passes by Useppa Island. 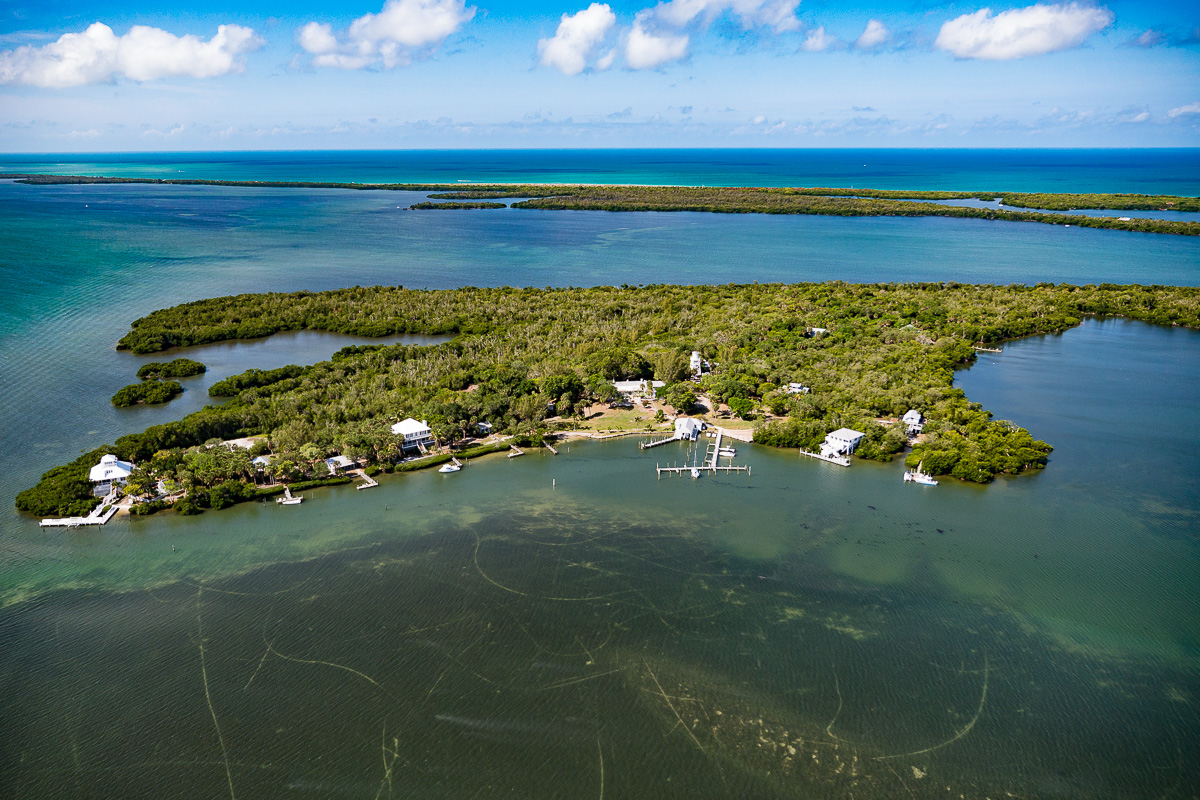 Cabbage Key with the restaurant that allegedly inspired the song “Cheeseburger in Paradise.” 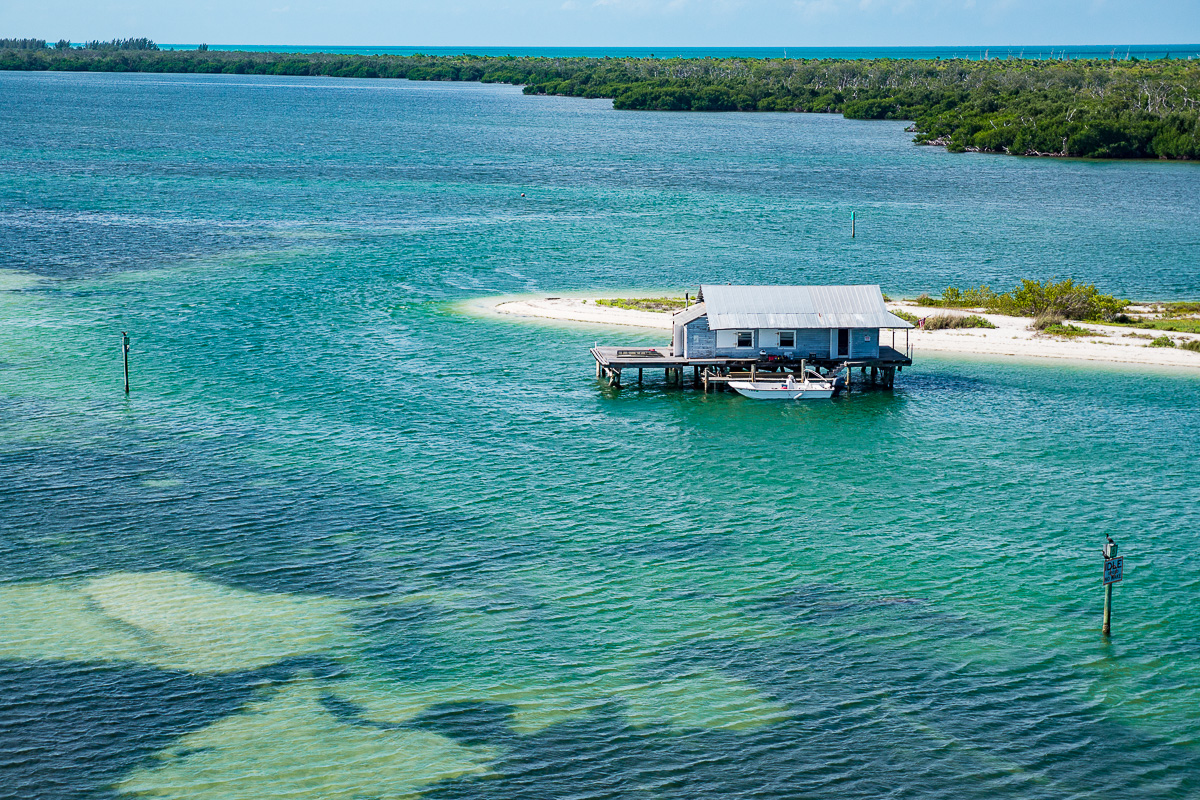 Fish Shacks, reminders of the waterman’s life of a bygone day. 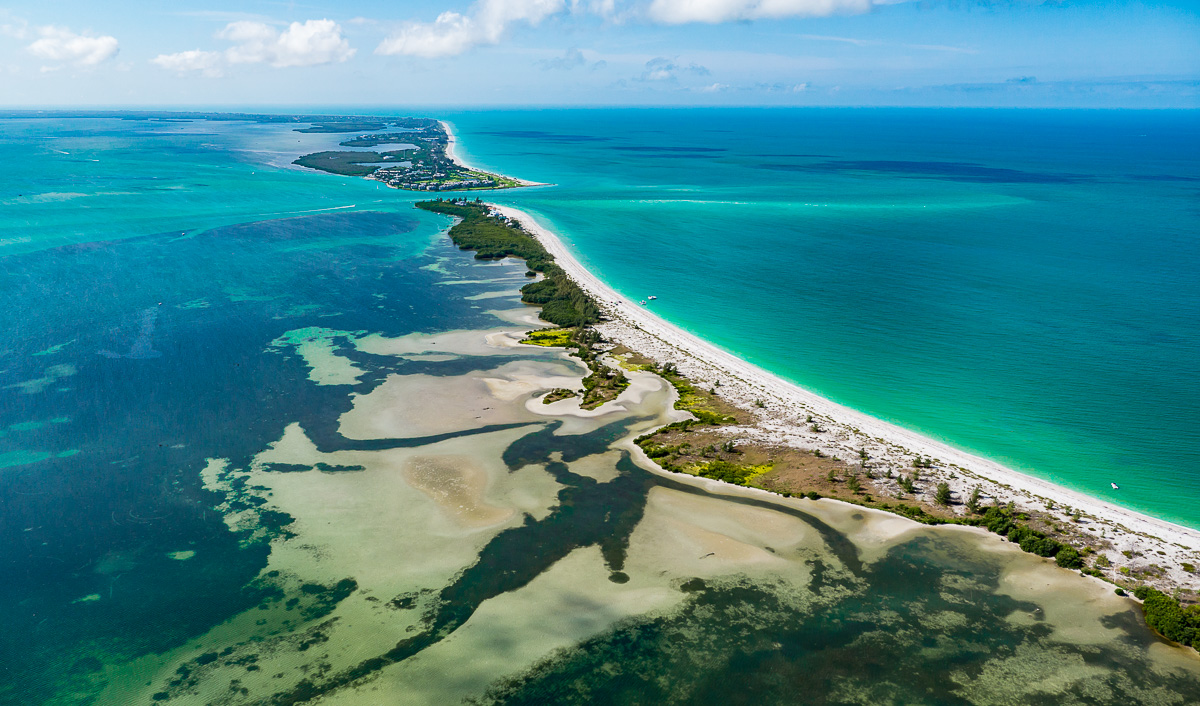 Looking south from the tip of North Captiva Island across Redfish Pas toward Captiva Island and Sanibel on the horizon. Eleven years ago Hurricane Charley cut a new pass through the island. Time and tides have since closed the pass, but the outwash is still evident. 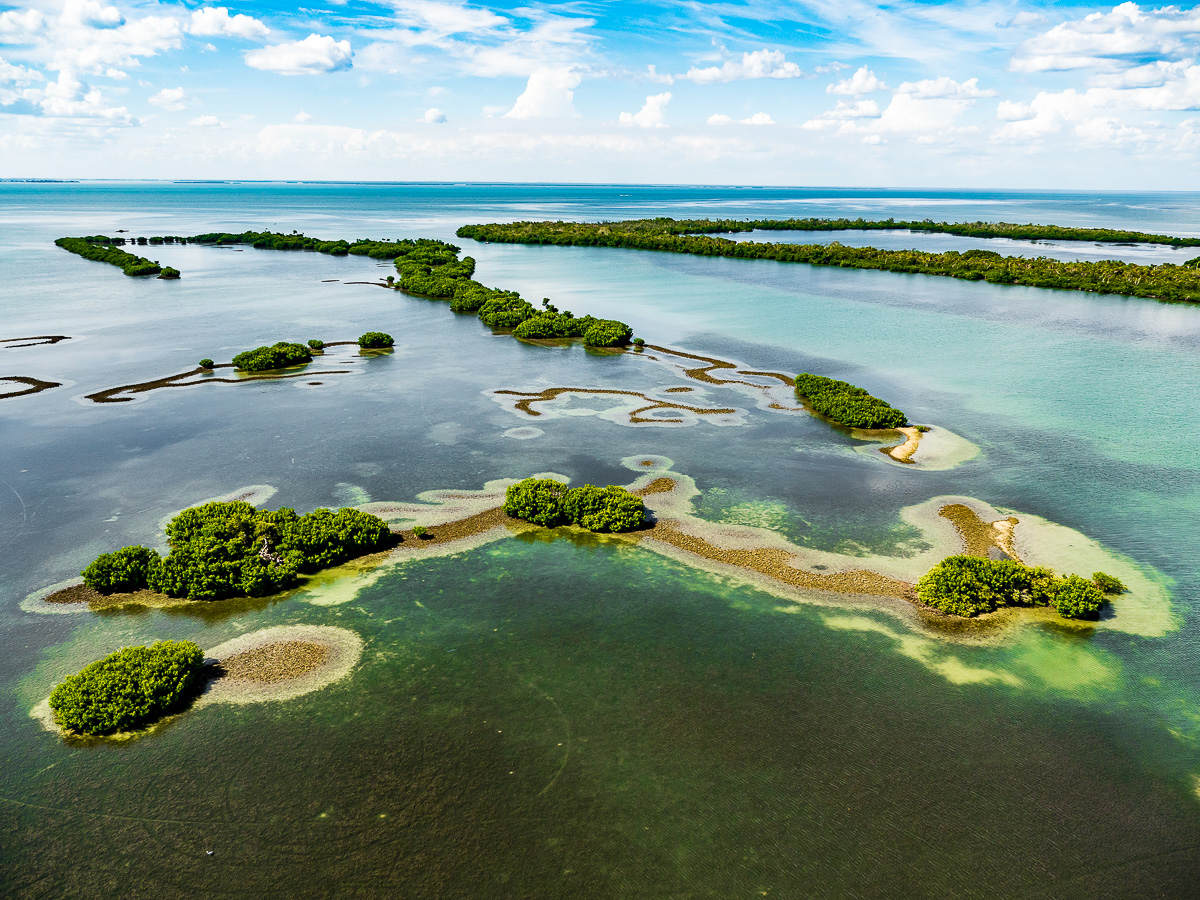 Mondongo Rocks, a cluster of oyster bars and mangroves. 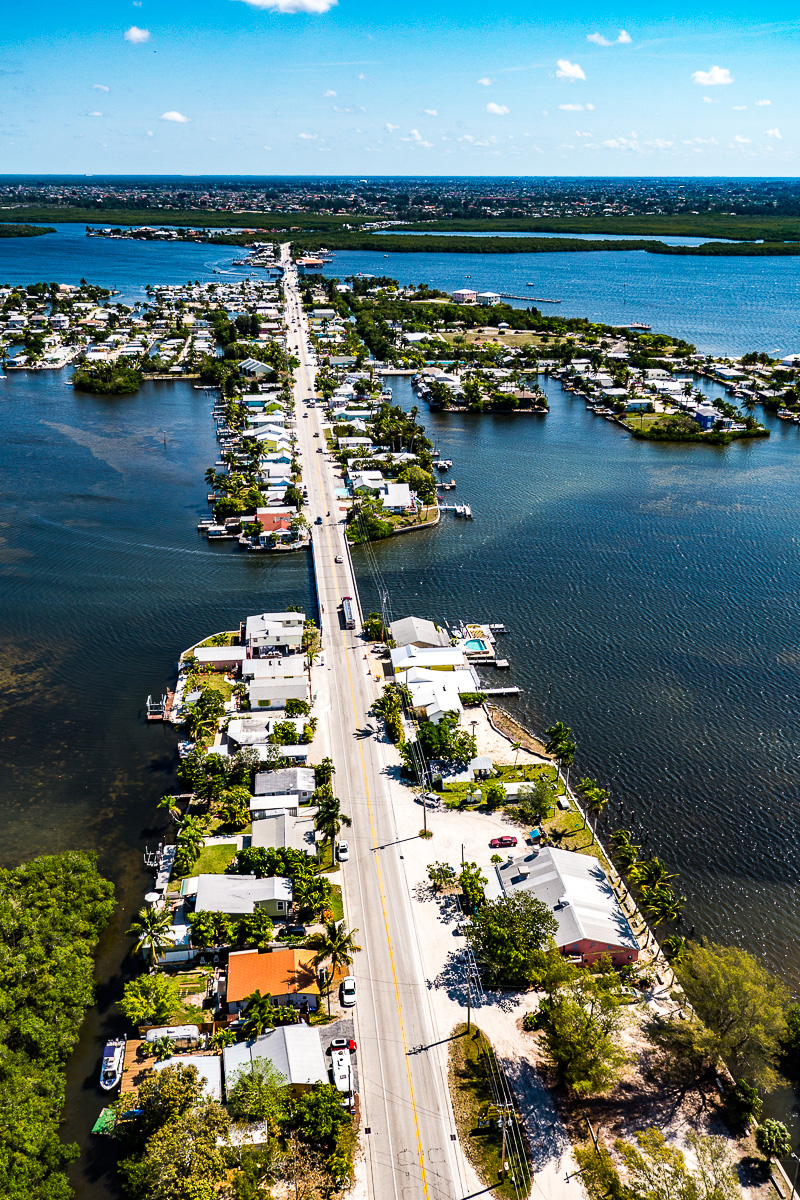 The village of Matlacha on the only road leading to Pine Island. 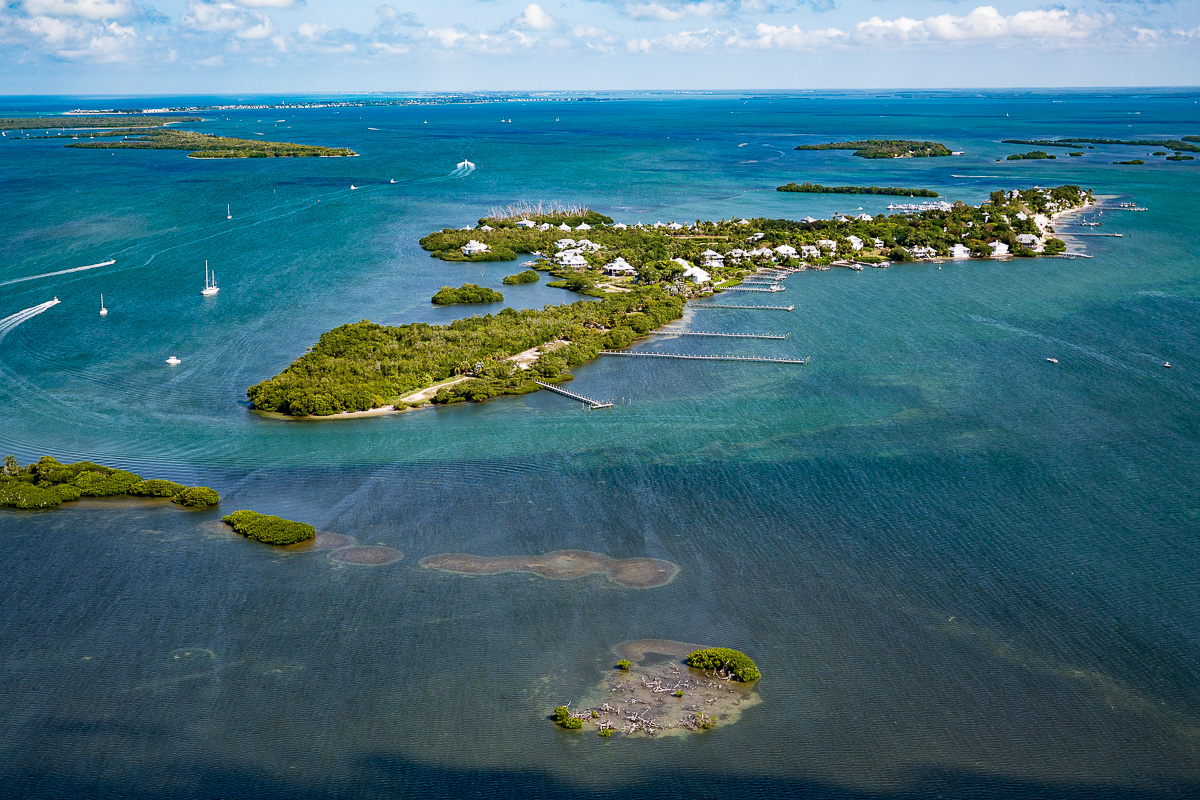 Looking through Boca Granda Pass into Charlotte Harbor. Cayo Costa is on the right and Boca Grande the left. The northern tip on Pine Island is on the upper right. Boca Grande Pass is the most famous area in the world for tarpon fishing and the fishermen in the boats below are hoping for a hookup. 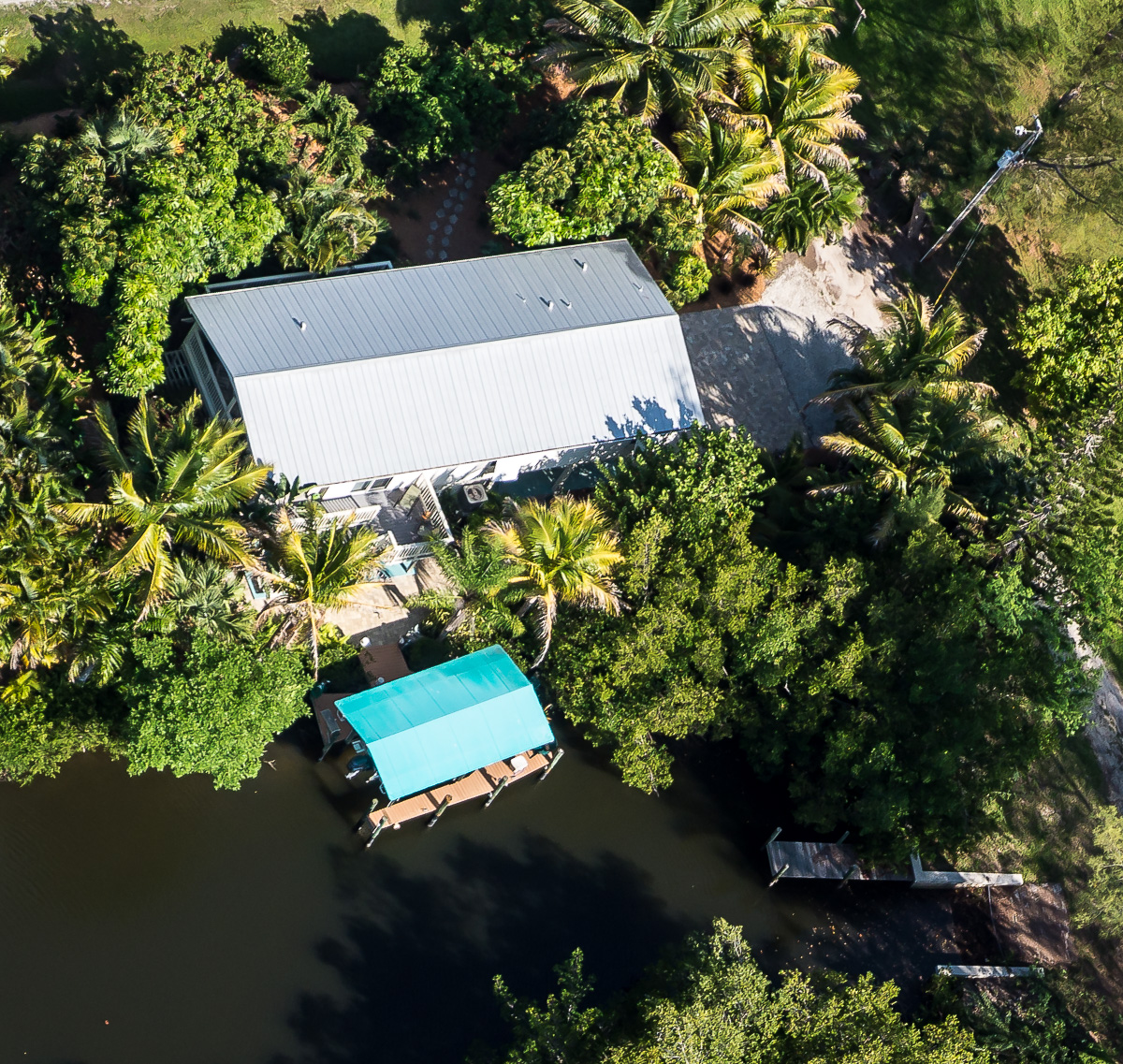