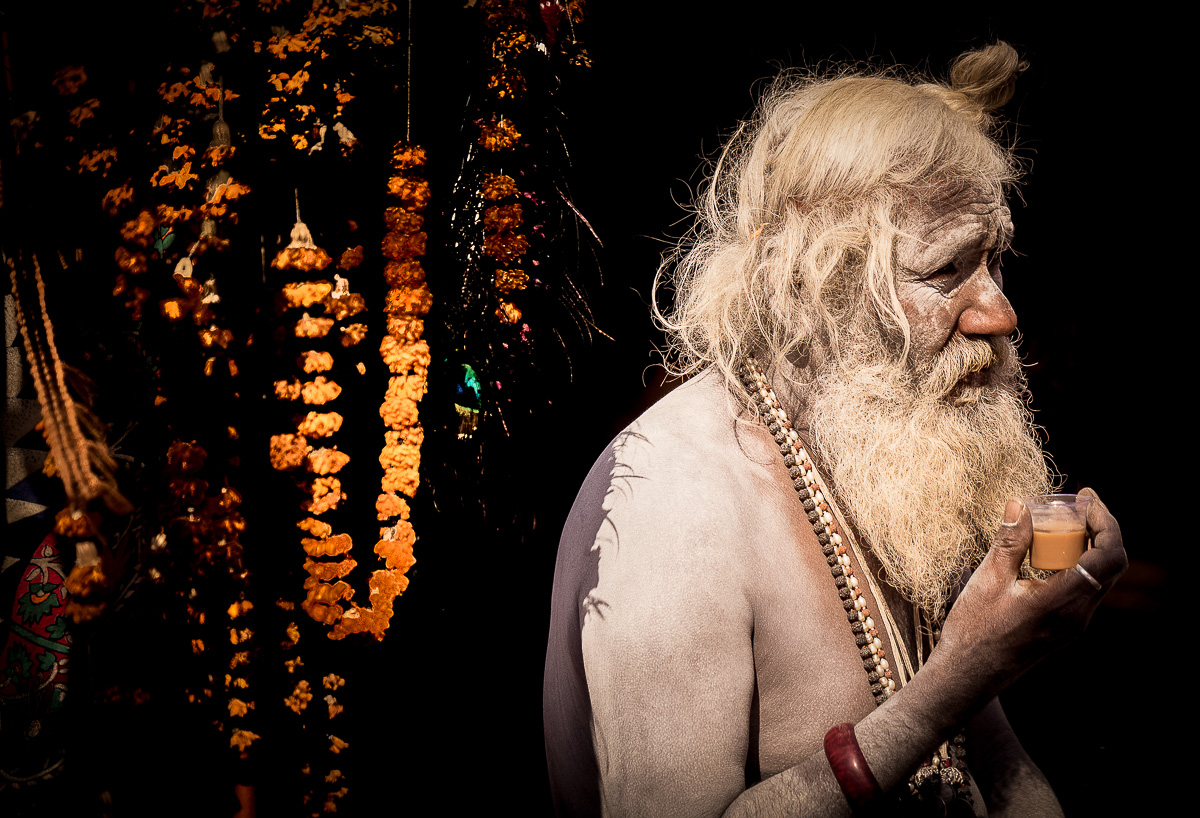 It is impossible to not be in awe of what is India. She is at once chaotic, unruly, exaggerated and constantly in motion.

The pace of life is frenetic and I believe all of India must be sleep deprived.

It is impossible, at least for me, to fully understand, much less describe her. And that’s the fascination.

I have heard that there are more billionaires minted in India each year than any other country in the world.

But that is not what attracts me. My India is rather tattered and frayed. And orange.

Especially the northern portion. Everything has a coating of orange from the polluted, smog-filled air and blowing dust from the arid land.

Saffron, a color that symbolizes all aspects of Hinduism, is the color of sadhus and saints,

ascetics and sages. It is the color of the holy men who have renounced the world

and represents the quest for light. The spirituality in the holy cities such as

Varanasi and Vrindavan, and festivals such as Kumba Mela in Allahabad is palatable.

The great secret of true success, of true happiness, is this: the man or woman who asks for no return, the perfectly unselfish person, is the most successful.

I am a frayed and nibbled survivor in a fallen world, and I am getting along. I am aging… I am not washed and beautiful, in control of a shining world in which everything fits, but instead am wondering awed about on a splintered wreck I’ve come to care for, whose gnawed trees breathe a delicate air, whose bloodied and scarred creatures are my dearest companions, and whose beauty bats and shines not in its imperfections but overwhelmingly in spite of them…

The Widows of Vrindavan. Widows, especially in rural areas, are often left impoverished and

may find their way to ashrams such as those in Vrindavan.

There they will pray and recite mantras to Lord Shiva in exchange for room and board.

Ladies chat briefly while saris dry in the billowing breeze.

If I were asked to define the Hindu creed, I should simply say: Search after truth through non-violent means. A man may not believe in God and still call himself a Hindu. Hinduism is a relentless pursuit after truth… Hinduism is the religion of truth. Truth is God. Denial of God we have known. Denial of truth we have not known.

recent Kumba Mela festival, the largest gathering of mankind ever.

It is said that hashish opens the mind and allows for deeper meditation.

A Hindu priest and follower of Lord Shiva offers his morning offerings and prayers.

Funeral pyres burn day and night on the ghats along the banks of the Ganges in Varanasi,

one of the oldest, continuously inhabited cities on earth.

There are some parts of the world that, once visited, get into your heart and won’t go. For me, India is such a place. When I first visited, I was stunned by the richness of the land, by its lush beauty and exotic architecture, by its ability to overload the senses with the pure, concentrated intensity of its colors, smells, tastes, and sounds… I had been seeing the world in black & white and, when brought face-to-face with India, experienced everything re-rendered in brilliant technicolor.